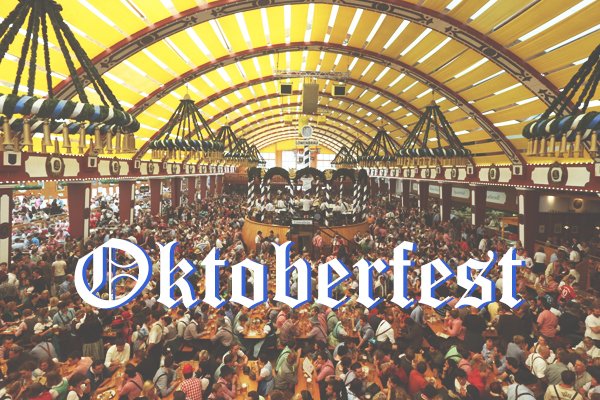 Germany’s familiar stein-accompanied toast to greetings, celebration and good will carries stronger significance this time of year. Oktoberfest, Germany’s grandest folk festival, is commencing in just past a week’s time. Clearly the world’s most famous event for beer consumption, it’s also a celebration of autumn and the harvest.

Oktoberfest merriments have been Bavarian tradition for over 200 years. In 1810, King Maximilian hosted a festival to celebrate the marriage of his son Prince Ludwig to Princess Therese. Horse races were held at what is now termed “Theresenwiese”. Free beer and food was consumed in generous quantities. It was so spectacular that Munich adopted it as an annual festivity. Despite its name, Oktoberfest is celebrated mostly in the last two weeks of September, ending on the first weekend of October. This year, at noon on September 17th, Munich’s mayor will tap the first keg proclaiming, “O’Zapft is!” (It is tapped!).

A regulation “Maßkrug” stein holds a Maß (pronounced mas) amount, one litre of beer. What kind of beer? The dominant beer styles at Oktoberfest have been subject to adaptation and innovation across time. Before refrigeration, Märzen beers were produced in the waning cool of spring to last the populous through summer until the winter brewing season resumed. Much of the spring beer was thus consumed at the festival. These initial Märzen beers were typically dunkel (dark) lagers. Their darkly kilned malt offered a slightly roasty overtone. Adoption of modern kilning and refrigeration led to lighter-style lagers that could be brewed year-round, rendering the term ‘Märzen’ useless.

It is storied that in 1872, Spaten’s Schottenhamel beer tent ran dry of dunkel. To keep the beer flowing they poured kegs of a strong Vienna-style lager. Though quite pricey, Spaten’s Ur-Märzen was an instant hit. This amber-hued malty style was of bock strength but still very quaffable. Oktoberfest lagers remained high octane through the end of the 19th c., eventually losing strength during both World Wars. Märzen lagers of the 20th c. became reddish-brown and of moderate strength. It is in the last two decades that golden lagers have taken the reigns as the most popular Oktoberfest accompaniment.

The festival’s strict beer regulations mean only breweries within Munich are allowed to serve beer, including: Augustinerbräu Mϋnchen, Hacker-Pschorr, Hofbräu, Löwenbräu, Paulaner and Spaten-Franziskaner Bräu. However, those rules only apply in Munich! Many German and American craft breweries have created exceptional examples of Oktoberfest lagers. Following are some of our seasonal favorites:

Paulaner Oktoberfest-Wiesn: 6pk – $9.99 //  Brewed and distributed to the United States but once a year to honor Oktoberfest. Paulaner’s Wiesn is of the golden variety, full-bodied yet super mellow. Fragrant noble hop aromas and a clean, seamless maltiness please the senses. The Oktoberfest-Wiesn is currently the most popular beer at Oktoberfest.

Ayinger Oktober Fest-Märzen: 500ml – $3.49, 4pk – $9.99 //  A perennial favorite of the France 44 staff, this is one seductive lager. Incredibly smooth, you’ll find yourself sipping it without intention. A slightly sweet, malty nose with notes of dark bread, raisins, tea, and honey. The palate is serene: balanced caramel-y malt with a touch of spicy, herbal bitterness. Truly one of the best you’ll ever try.

Aecht Schlenkerla Rauchbier Märzen: 500ml – $4.99 //  A common belief in Germany is that you cannot say you have visited Bamberg if you haven’t been to the Schlenkerla brewery. Their specialty Märzen-style Rauchbier (literally smokebeer) is unique and aromatic. Schlenkerla kilns their malt with fire from beechwood logs, lending a noticeable smoky campfire aroma. Matured in centuries-old cellars, it tastes mellow yet magnificent. Woody smoke, coffee, tobacco, and bacon-like aromas greet your senses. In the face of its intense nose, the palate is much cleaner and light-footed: malty notes of caramel, chocolate, earthy smoke and a slight salinity. It’s surprisingly smooth and quaffable! Try this delicious brew if you’re in for an adventure off of the Märzen style’s well-beaten path.