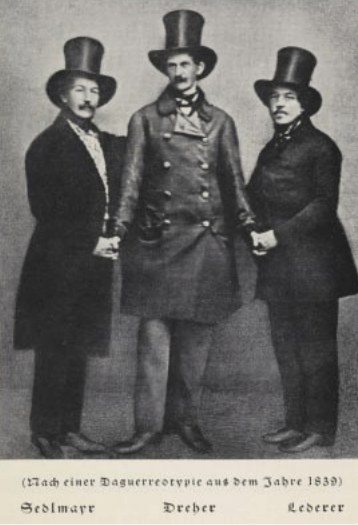 A Tale of Two Brewers

This tale of two brewers begins mere decades after the French Revolution, the focal point of Charles Dickens famous historical novel, A Tale of Two Cities. While the story shares motifs of espionage and (beer) revolution, we can steer clear of the trial, imprisonment, and bloodshed. Instead, this tale is of two brewers whose individual accomplishments were interknit in history—two comrades from neighboring countries—who transformed the brewing world through applied science and the introduction of new beer styles.

Anton Dreher was born on the outskirts of Vienna in the late spring of 1810. The Drehers were a brewing family but had weathered through seasons of struggle. His father, Franz, was the prevailing proprietor of the Klein-Schwechat brewery at the time. Unfortunately, their time would be minimal. Upon his father’s untimely death in 1820, Anton still had much to learn of the family trade. He would need to apprentice as a journeyman brewer to eventually take reins of the Klein-Schwechat brewery.

Gabriel Sedlmayr II was born shortly after Anton in 1811 Munich, Germany—a mere four years after his royal brewmaster father had purchased the then obscure Spaten Brewery. During his father’s tenure, the brewery bullishly climbed to the third-largest in Munich. The younger Sedlmayr was quick to embrace his father’s ideology in regards to the science of brewing. Spaten had built its castle with walls of innovation. Gabriel II, akin to Anton, would also require formal instruction to pursue a future in brewing.

Despite hailing from different cities, Dreher and Sedlmayr had become close friends during their adolescence—so the brewing prodigies set out on a six year conquest across Europe to absorb as much of the known and unknown brewing knowledge as possible. The industrial espionage that ensued would lead to important advancements in brewing science.

The dawn of the 19th century had already been a significant era for beer. Industrialization had welcomed steam power and railway systems into the picture—expediting production, widening distribution, and allowing easier travel. Brewers of this era had the ability to actively learn from others in their trade in distant locations. Dreher’s and Sedlmayr’s journey led them through Belgium, Germany and the British Isles, among other places. Along the way they snuck temperature readings, wort samples, and fermentation analysis but were never troubled. Dreher and Sedlmayr II were particularly fascinated by English kilning techniques.

Most brewing countries of the time dried their malt using direct-kilning techniques. The resulting malt was inconsistent at best: some roasted, some brown and some pale. Brits did it differently. The brewers of England had prospered from their country’s power as a great seafaring nation. British beer was produced on an industrial scale and shipped throughout the continent. This income funded an immense amount of research in brewing science. British brewers were meticulous with malting, chemistry and temperature control.

Malting in Britain was revolutionized by an engineer by the name of Daniel Wheeler. By kilning malt with a revolving metal drum, his invention utilized indirect heat to ensure more homogenized result. Malt could be kilned to the brewer’s specifications. The English used this method to create consistently pale malt that soon would be used in the first Pale Ale. Popularity of this lighter beer style didn’t go without notice.

Dreher and Sedlmayr returned to their breweries with a wealth of modern brewing knowledge and a fire in their bellies. They had two goals: to introduce pale malt to central Europe and to introduce commercial lager beers to the world.

Dreher developed his Viennese malt using the framework of English pale malt, but at a slightly higher temperature—bringing out toasty notes but still maintaining the qualities of a base malt. Vienna malt was noticeably darker, more aromatic and gave beers a richer body. In 1841, Dreher used this malt to produce an amber beer called Vienna Red—the first of the pale lagers brewed in central Europe. The Vienna lager immediately gained traction across the Austro-Hungarian Empire, catapulting Dreher’s brewery to the highest ranks of production.

Gabriel Sedlmayr took inspiration from his friend and set out to create his own Viennese-style lager, but with a slight adjustment. Sedlmayr chose to kiln his malt at a higher temperature with longer exposure. This Munich malt made a much more robust beer and was highly aromatic. Bready, caramelized notes wafted from this beer. Sedlmayr’s märzenbier was introduced that same year in 1841 during the Oktoberfest celebrations. Like the Vienna lager, it was an instant success.

Invention of the Vienna lager and märzenbier exemplified a fusion of Bavarian-inspired bottom-fermentation and English-inspired malting. These two new styles laid the groundwork for many lager beers that followed—and it wouldn’t take long—other brewers had also been experimenting with pale malts. In 1842, just one year later, a beer was introduced that would forever transform brewing history. Brewers in the town of Plzen released the first-ever golden lager beer—the Bohemian pilsner. This is where the paths begin to split for Vienna lagers and märzenbiers. Over the ensuing years, golden lager beer would slowly chip away at the market share held by Vienna lagers and märzenbiers. Only the latter would successfully weather these tempestuous times.

Brief Austrian rule over Mexico in the latter 1800s brought an influx of Germanic immigrants, along with the Viennese-style lager. Popularity in Central America prompted Mexican breweries to begin brewing the style. But in its homeland Vienna lagers had regressed to regional specialty, and eventual extinction. While the style was kept afloat in Mexico, increasing use of brewing adjuncts (mainly corn) left the beer a shadow of its original self.

German märzenbiers, on the other hand, progressed in popularity. Three decades after its introduction as a style, märzenbier was first introduced as Oktoberfestbier by the Spaten brewery. This move cemented its place in history, as other Munich breweries began to produce their own märzenbiers for Oktoberfest.

Fast-forward a century and a half, to our current era. As the dog days of summer unwind and the seasons begin to shift, beer drinkers perusing the France 44 cooler have begun to pick through the annual influx of märzenbier and festbier releases. While everyone associates these brews with the fall season, their Austrian cousin is often forgotten. Vienna lagers—cut from the same cloth—deserve your attention this fall.

The rise of American craft beer has resurrected the Vienna-style lager, albeit on distant soil. We happen to have multiple local breweries that produce remarkable takes on the style. Vienna lagers—with smooth, toasty malt and a touch of drying bitterness—are a perfect, sessionable fall-afternoon companion. Check out some of our favorites below:

As head brewer Niko puts it, “(this is) beer-flavored beer.” Abiding by the concept of gemütlichkeit, or “good cheer”, this Vienna lager is meant to be enjoyed socially amongst friends. Smooth, mellow toasty malt and a grassy hop finish make it a true delight!

Named after the bricks that line the old boilers. Mild and subtly malty with a faint whiff of hops for a well-rounded drinking experience. Firebrick won a silver medal at the 2017 World Beer Cup!

Brewed for the first time in 1865, when Vienna lagers were initially being introduced to Mexico. It is Mexico’s oldest beer brand. This medium-bodied Vienna-style lager has a rich amber color and full toasted malt character. Smooth and crisp with a touch of hops to balance. Do not serve with a lime.