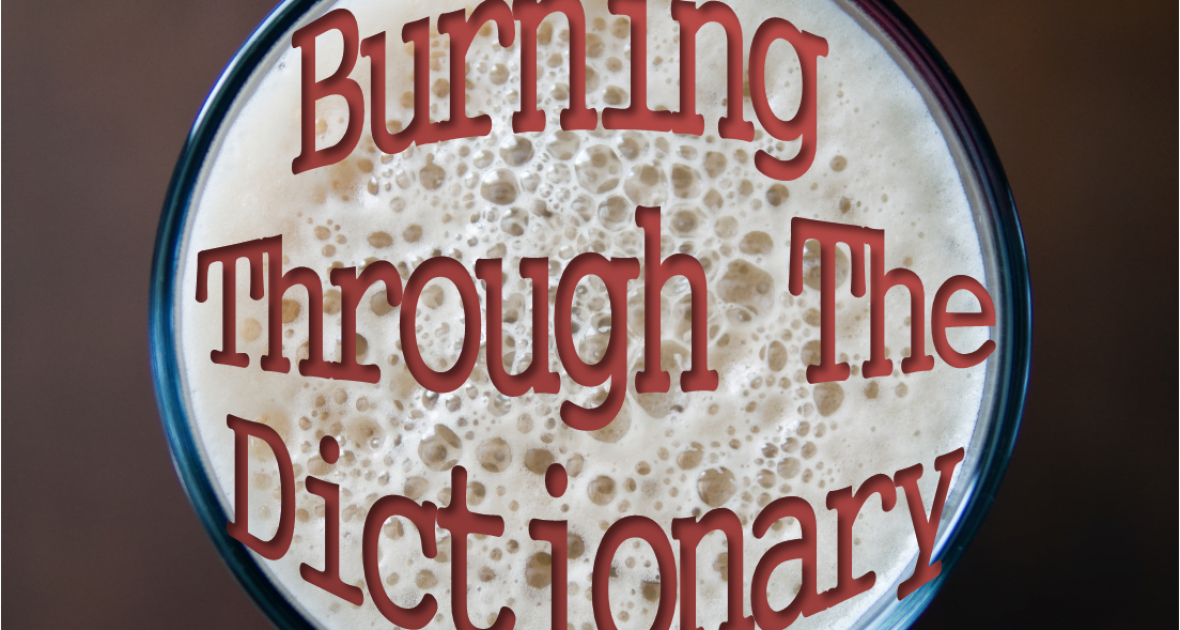 Burning Through The Dictionary

When the France 44 walk-in cooler was built years ago, nobody could have guessed that our spacious beer cave would one day be bursting at the seams. Available shelf space is at an all-time low, and the ebb and flow of seasonal releases can cause the selection to shift like the tides. Finding the beer you’re looking for can be a daunting task, the variety of label art is bound to induce some level of sensory overload. (Quick tip for those who don’t know, our cooler is alphabetical by brewery!). This branding game of Where’s Waldo embodies another upcoming hurdle for craft brewers.

As craft beer continues its unprecedented growth from hobby industry to big business, brewers are rapidly running out of language, and consequently, an ability to differentiate themselves. Names express a narrative, shape an image, and can connect with the consumer on an individual level. Craft beer has long had a culture built upon camaraderie and creativity, but trademark and intellectual property law could pose as a serious roadblock to the preservation of these ideals.

In such a rapidly changing industry, some adolescent brewers across the country are unknowingly choosing beer names that may warrant legal trouble down the road. It is up to brewers to perform the proper research, and trademark law’s intricacies may not be everyone’s forte. There are a dwindling number of beer-related puns left unused, and some have even been reproduced. As a result, many name-duplicates exist across our country’s beer scene. For some brewers, there’s no problem with that, as long as each party keeps to their localized distribution footprint. It’s when brewers cross into each other’s markets that we most commonly see trademark infringement lawsuits. There’s been an increasing number in recent years – involving many of craft beer’s biggest names, and even a few hometown heroes.

While some of these disputes have been met with negative press and consumer backlash, I urge you to resist placing the blame. It is chiefly a brewery’s own role to protect their trademarks. If they don’t protect their brands, they are not performing due diligence by their owners, investors, employees, and consumers to whom they have an obligation to. With around 100,000 unique beer names and counting, the task of identifying potential trademark threats is becoming tougher.

Adolescent breweries and those still in-planning are experiencing the uphill battle of defining an image for themselves, with language that doesn’t step on toes. Lack of care has spawned lawsuits, cease-and-desists, and some ugly social media battles, but let’s spare the gory details. We’ve also seen some stellar examples of breweries working together to avoid the courtroom, and sometimes even collaborate!

Finding creative ways to gain attention without upsetting the established brass is the new arena. We hope that our beer community continues to support one another and find seamless solutions to complex problems.

As Beer Buyer Bill, head honcho of the F44 Beer Dept. says, “the proof is in the pudding.” What we at France 44 have always supported is great beer! In the coming years, we are likely to see more unpredictability, and at the same time, more people taking beer to the next level. Many of our homegrown brewers and regional darlings are defining the next generation of craft beer, and finding the language to support it is just as important! Here is a short list of some of our favorite beers that have been attractors of controversy, chill collaborations, or just straight-up nifty nomenclature.

[My intention was not for this article to sound ominous, but to shed light on an interesting speed bump in the fascinating world of craft beer.]

The Beer formerly known as Vampire Slayer. This imperial stout is brewed with holy water and uses malt that was smoked on vampire-killing stakes. Apparently, using the term vampire is off limits these days, despite it being a creature of folklore. Clown Shoes clapped-back in cartoonist fashion with a wild, office-party-gone-wrong label. Full, smoky-chocolate notes and nuances of hickory, dark fruit, molasses and spice.

A F44 staff-favorite. Sue is tall, lean, and thankfully doesn’t come with T-Rex arms. The widely-respected brewers of this Citra-hopped Pale Ale dubbed their brew PseudoSue, in honor of the largest Tyrannosaurus Rex fossil ever discovered. But it is Chicago’s The Field Museum, the established home of Sue, that holds trademark rights for this monstrous 67 million-year-old fossil. After the Field Museum reached out to Toppling Goliath regarding their pale ale and its pseudonym, the two buried the hatchet through cross-promotion. Freshly designed Field Museum-themed labels now adorn the acclaimed pale ale, and Toppling Goliath has brought their beer to Chicago’s whale-sized beer market. PseudoSue lashes out with fierce grapefruit, mango and sweet herb aromas. It’s crisp, refreshing mouthfeel finishes with a brisk, fruity hop bite.

The spritz-y Belgian-style belle, Farm Girl Saison, has been Lift Bridge Brewery’s flagship beer and top-seller since 2008. A mere three years later, a Wisconsin competitor began selling its Farmer’s Daughter Belgian-style blonde ale here in Minnesota’s market, using the same tricolor palette and farm girl imagery. Both breweries had trademark rights to their names, but clearly this didn’t help once the two shared space. No doubt aided by consumer confusion, Farmer’s Daughter procured tap lines around the cities that once poured Farm Girl Saison. Unable to reach an amicable agreement, it went to the courtroom. No matter the result, it goes to show how important this is for beer. Farm Girl Saison remains a customer favorite: it’s sweet, floral spice yeast aromas and dry, fruity palate make it a perfect companion at the dinner table or as a backyard sipper.

Sour in the Rye has a name so clever, that I couldn’t resist its inclusion! To me, this is the near the pinnacle of beer-name creativity, giving the buyer an expectation of flavor in a genius way. It is a brew that not only challenges the brewer, but also requires great patience. Sour in the Rye uses a substantial amount of rye malt and rested for many months in oak barrels. Peppery clove aromas dance atop notes of tart cherry, earth and vanilla. Supremely well-balanced.

What are you going to do when you get home? Sit your ass down and enjoy this citrusy, sticky Double IPA! Hop puns are the most fun, aren’t they? Featuring lots of late-addition Citra hops, this beer leaps out of the glass with tropical citrus and keeps just enough malt for proper balance. It has and ABV just high enough to keep you warm on those cool fall evenings.