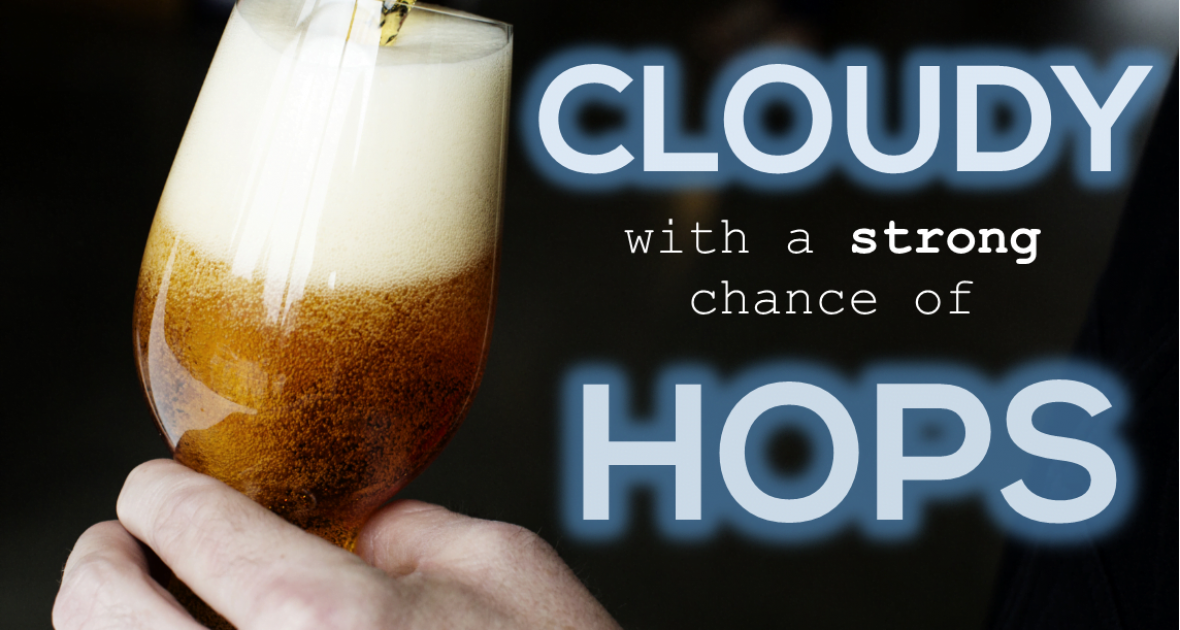 Cloudy with a Strong Chance of Hops

Do you drink beer? If so, you have probably noticed the opaque, juice-like beer flowing from draft lines across the country. These aromatic, pulpy, hop-bomb IPAs are currently the hottest trend in beer, elevating some small brewers to near superstar status. But this popularity has its roots in a style that’s been brewed in New England for nearly fifteen years now. John Kimmich, owner of The Alchemist brewery in Vermont, has been brewing the famous Heady Topper IPA since 2004 – a stalwart on BeerAdvocate’s Top 10 list since 2011. Kimmich doesn’t filter or pasteurize his celebrated product. Heady packs fruit-bowl sensations and silky, seamless bitterness into an unassuming silver can.

Kimmich and other noteworthy New England brewers are viewing IPAs through a different lens. Throughout much of the 2000s the belief was that bitter is better. Brewers, chiefly from the west coast, were punishing palates by elevating IBUs (International Bitterness Units) to extraordinary levels. Beer connoisseurs were deemed worthy by summiting Mt. Bitterness at an elevation of 100+ IBUs. But this youthful league of east coasters have turned their back on bitterness, favoring intensely aromatic and flavorful hop character. A Boston Celtics – Los Angeles Lakers like rivalry has ensued.

It all comes down to how and when the hops are utilized. Hop flowers have compounds called alpha acids that are isomerized when added to boiling wort (the precursor to beer). This isomerization is what creates bitterness. Adding hops early extracts more bitterness, but less character. Late addition hops are retain more volatile aromatic and flavorful compounds in the beer, but contribute less bitterness. New England brewers have been crafting their IPAs by favoring the latter. Little attention is given to IBU levels, the goal being bright hop aromas, a full, juice-like mouthfeel, and low bitterness.

Where does the haze come from? It’s actually a byproduct of the methods used to create this flavor profile. East coast IPAs receive little bittering hop additions, with lots of late addition hops and aggressive dry-hopping. This regimen can be carried out to such a degree that the beer is inflicted with a permanent “hop haze,” caused by microscopic vegetable matter. Certain yeast strains will also encourage turbidity and produce fruity esters. The last step is minimizing or omitting filtration. Fining and filtering is important for shelf life and stability, but it can also strip particulates and proteins from beer that enhance mouthfeel and flavor. New England style IPAs are best consumed fresh, and if you can find one on shelves it probably hasn’t been there long anyway.

Once just a modestly popular regional specialty, New England IPAs are a sensation that is here to stay. Brewers from the Midwest and West coast have even hopped on the bandwagon, putting their own spins on the style. Though there are just a handful available in the Midwest at the moment, don’t expect it to stay that way. Here are some of our France 44 favorites:

Lupulin Blissful Ignorance Double IPA – $11.99/4pk (this ultra-popular beer is hard to keep in stock–check with us next week!)