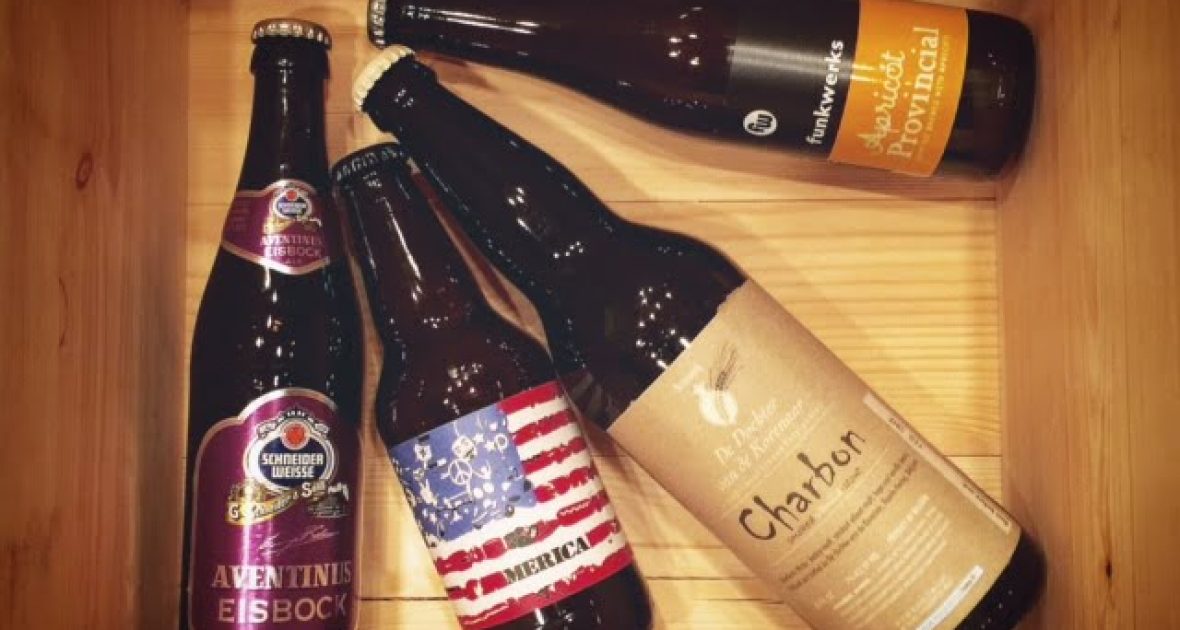 Drinking Outside the Box

Do you occasionally find yourself stuck in a routine? Despite the great capacity of the human mind, we are capable of slipping into a state of comfortable apathy. You venture out for the weekly beer-run: grabbing the old stand-by IPA, a quaffing 12’er of lagers, perhaps a stout or porter to boot. The familiarity of these flavors soothes you into complacency.

There’s certainly nothing wrong with the tried and true approach. A well-worn path is smooth and easily traversed. But, do you wonder what you might be missing along the way? A new six pack of some weird style you hadn’t heard of? That bomber of a unique barrel-aged beer that was just outside your comfort zone? You are left wondering of what might have been. It’s time, I say, to “risk it for a biscuit.” Today’s craft brewers are creating some distinctly delicious beers that are breaking down conventional flavor barriers. Here are some of our favorite unique brews that are worthy of your attention.

The France 44 beer crew has been all aboard the Funkwerks train recently, with a compelling collection of farmhouse and sour ales that run with the best of ‘em. Apricot Provincial is a sessionable Belgian-style sour ale inoculated with lactobacillus. Fermented out with a Witbier yeast strain, the Provincial has a dry, spritzy shell that encapsulates juicy notes of apricot and lemon zest. Sweetness and acidity are in perfect harmony, this beer is the metaphorical transition to spring.

These Sooner State suds-makers have long been playing around with farmhouse ales. ‘Merica is a single hop, single malt farmhouse ale that is partially fermented with Brettanomyces. “Brett” can be a nightmare for most vineyards, but when used judiciously, it can be quite intriguing in beer! Hallertau hops open it up with bright citrus and the typical noble aromatics, underpinned by funky hay-like notes. A tropical character on the palate melds gently with the Brett’s temperament. A crisp whack of bitterness brings everything together.

Eisbock – this German rarity has few examples, but deserves recognition! Beers of this category undergo a freezing process to separate out water, concentrating the other components, leading to increased strength. Freeze distillation can occur in beer because water has a lower freezing point than ethanol. This technique was (disputably) stumbled upon in Kulmbach, Germany when a barrel of bock beer was misplaced during an especially cold winter evening. Schneider’s Aventinus Eisbock clocks in at 12%, and boasts it beautifully. Aromas of plum, almond, and marzipan dance atop the much recognizable banana and clove notes found in German wheat beers. Its mahogany hue readies you for the full palate of banana bread, caramel, chocolate, molasses, rum cake, and nuts. This distinctive beer is nearly unparalleled.

Kvass is a style with Slavic origin. It is most commonly made from rye bread and then flavored to the brewer’s choice, generally with fruits and mint. Though somewhat common in Russia and countries of the former Eastern Bloc, it is nearly impossible to find stateside. Bent Paddle’s iteration is of imperial strength and spiced with raisin, lemon peel, and spearmint. It shows a bright zestiness and full bready palate. You could say it kicks Kvass!

Somewhat of an anomaly, Dochter is a Belgian brewery with an inclination towards American styles. Charbon is a dry stout flavored with Madagascar and Réunion vanilla beans as well as Weyermann oak smoked wheat malt. It pours an extremely dark brown, bordering on black, with a lacy mocha-hued head. Smoke-infused aromas of chocolate, mocha, treacle and liquorice. The mirroring flavors are enhanced by woodsy smoke and a coffee-like bitterness. The interplay of sweet and smoke is captivating.

Sahti is one of the oldest surviving beer styles, and in true Finnish fashion, is typically brewed in a sauna. Juniper branches are used as the filter medium to separate wort from grain, and hops are rarely used. The Finns would use baker’s yeast to do the deed, resulting in banana bread-like qualities. On top of all this, they used obscure outdated brewing vessels which are most uncommon today. Bare Bear is brewed in a traditional format brew house, but Off Color makes up for it. Juniper berries are added to the mash of barley and rye, with oak staves used to impart some tannin. Woody, banana and dark fruit aromas complement a malty, sweet and spicy flavor profile.

Thought I was just going to talk about beers, didn’t ya? Well here’s a cider that spits hot fire! Your expectations will be smoked when it hits your lips. Fresh Freewheeler Dry Apple is infused with macerated cucumbers and habañero peppers during the conditioning process. The pepper’s heat just barely scratches your throat before a wave of cucumber crashes in to soothe you. Any of my skeptical thoughts were quickly diminished. Sociable, you’ve made me a believer!