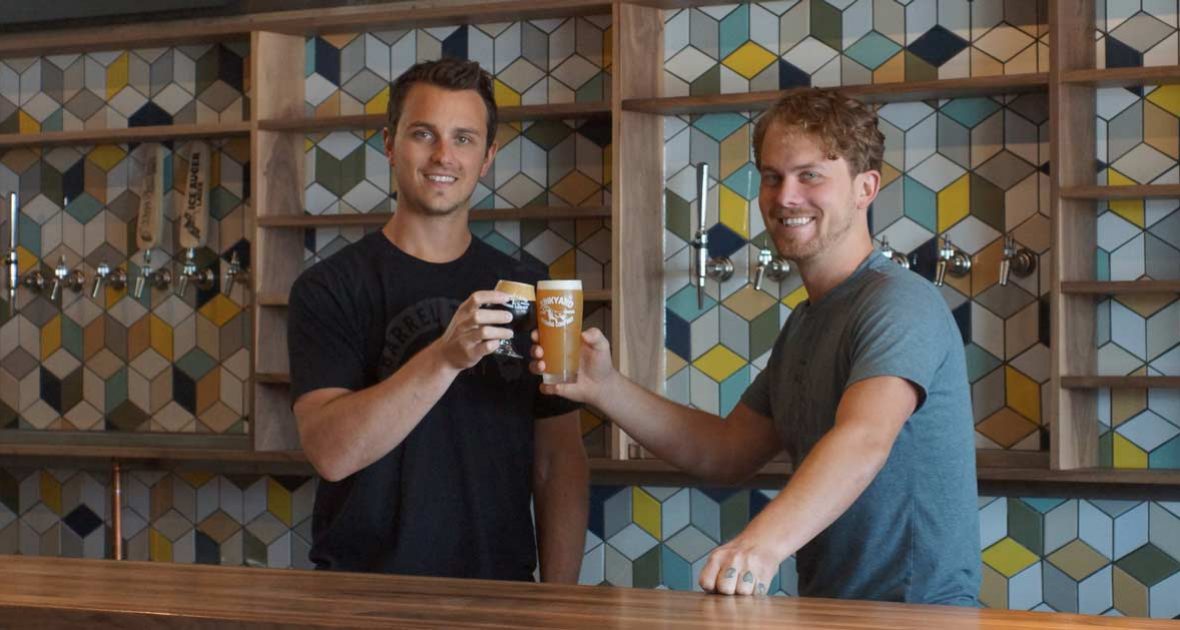 Like a predator roaming the wild world of craft beer, they strike with brisk, calculated force, then withdraw to their elusive ways. Cube-shaped cardboard boxes, once filled bountifully with delicious crowlers, now lie empty in the walk-in cooler—hollow carcasses picked clean by the last few lucky individuals. That’s all folks—until next time. Such is a story of one of Minnesota’s hottest breweries.

Junkyard Brewing Co. of Moorhead, MN is one of two Fargo-Moorhead breweries that have taken the Twin Cities beer scene by storm. On Junkyard delivery days, the phone is usually ringing off the hook, and a cluster of eager beer lovers wait outside the cooler for the latest crowler release. If you aren’t timely, they’re easy to miss. But all this excitement started with humble beginnings.

Junkyard began as a dream for then college-homebrewer, now-co-founder Aaron Juhnke. Why name it Junkyard? Junkyards are inherently local, unique places where one person’s scrap is another’s treasure. This unique, local, character-driven vibe is what powers this brewery. After enlisting his brother Dan for help, the duo took the little seed money they had and went to work. After lots of research, paperwork and some serious elbow grease, their nanobrewery became a reality in the summer of 2013—eventually moving to a larger space a year later. After two brewing system upgrades, Junkyard is now officially large enough to be considered a microbrewery, but still struggling to keep up with demand from thirsty beer drinkers.

With an unusually high frequency of Junkyard deliveries these last few weeks,we will have FOUR different Junkyard beers in stock. That’s a first! The highly anticipated Super Slurp Cherry Hibiscus will be arriving on Friday, and we still have some residual inventory of three other delicious beers: Saskatooner, Technicolor Dream Wolf, and Strawguavberry! Stop in this weekend for an armful of crowlers, you won’t regret it.

Saskatooner is a Berliner Weisse-style sour made with blueberry puree, pouring a vibrant, entrancing magenta hue with a cotton-candy colored lacing of foam. Aromas of fresh blueberry muffins, citrus zest and lightly-blended kool-aid. On the palate it evokes sensations of under-ripe blueberries, raspberries and acidity akin to that of a honeycrisp apple.

Junkyard’s first ever sherbet-style IPA, made with tangerine and lactose sugar. Dry-hopped with Amarillo, El Dorado and Cryo Citra to enhance the tangerine notes with flavors of pithy citrus and under-ripe nectarine. Just enough hop bitterness to drink like an IPA, but the fruit and sourness are behind the wheel.

Junkyard’s Shake-O-Matic series of Milkshake-style IPAs is all about experimentation, innovation and just straight up fun flavor combinations. This week’s release features purees of strawberries and guava with a creamy base of lactose and vanilla beans. Tart, fleshy fruit character gives this beer great brightness on top of the silky body and mellow bitterness.

Junkyard’s Super Slurp series features variations of a sour ale made with creamy lactose sugar and silky Madagascar vanilla beans. The fourth release of Super Slurp brings a deliciously tart combination of Montmorency cherries and dried hibiscus flowers. Whereas the last three releases have sold out immediately, we are receiving a few more cases so hopefully it will last into Saturday!