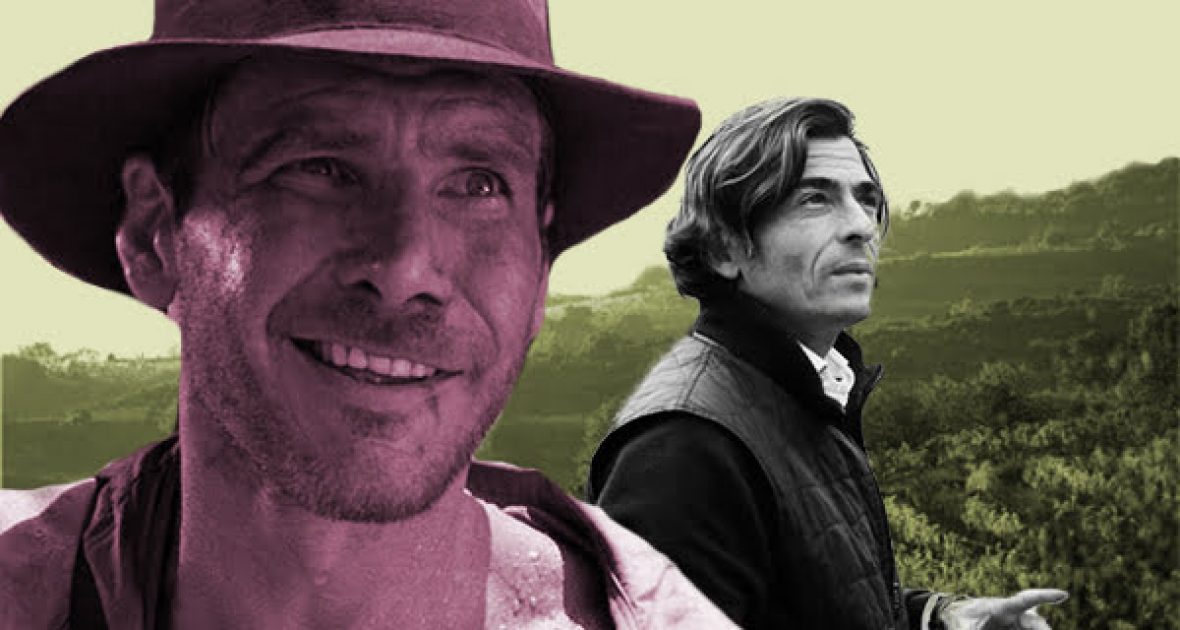 One of the main areas of questioning we routinely hear regarding wine is around its winemaking: What are the grapes used? Is it oaked? How long does it sit on the skins? Does the winemaker use biodynamic methods? People who are passionate about wine (or about learning about wine) are full of these and similar questions.

For one prominent winemaker, however, this desire to dissect the wine is the very thing that destroys its charm. Telmo Rodriguez is a big proponent of mystery. By his philosophy, it is the mystery that helps to make the magic. He is an avid historian, one might even call him a wine anthropologist. For Telmo, he wants to know what the local anciano remembers about what his grandparents enjoyed drinking when he was just a little boy. In his pursuit, he will dig through dusty tomes and venerable parchment maps to locate forgotten vineyards on some remote hillside, like an oenological Indiana Jones thrashing through a forbidding tangle of long-abandoned vines.

Telmo is, first and foremost, a storyteller. Wines play a key role at the dinner table, where friends and family come together to share good food, companionship, intimacy and most of all, stories. Like a magical potion, wine helps to cast the spell that forms strong bonds between people. In his view, if one begins to analyze the magic, they turn it into something decidedly unromantic; a lab specimen laying upon a cold workbench instead of a work of art made manifest in each person’s glass.

With this in mind, we offer four very different wines all made by the same master. We encourage you to try them individually, judging each on its merits. They are all skillfully crafted by Telmo, each telling its own story.

Remelluri is Telmo’s family winery. The Remelluri estate’s origins date back to the 14th century when monks from the Toloño monastery founded a sanctuary and farm at the site. The monks later abandoned the site but local hermits continued to maintain the shrine while the Real Divisa, a local community organization, maintained the farms to accommodate the needs of pilgrims who came to pray at the sanctuary. The estate eventually was split up and sold. The modern winery was established in 1967 when Jaime Rodríguez Salis purchased the vineyards at the heart of the former estate. Since then Remelluri has been devoted to recovering the old lands of this historic site and restoring the original vineyards. This gorgeous Remelluri Reserva 2009 has clean, pure fruit up front, followed by predominant aromas of earthy red fruit intermixed with notes of vanilla and cinnamon, a satin texture with round, fine-grained tannins and quite classical and very well-proportioned style.

Made from bush vines of Tempranillo, Graciano and Garnacha, the LZ from Rioja Alavesa (one of Rioja’s most prominent subregions) was fermented with native yeasts and in cement tanks, followed by a few months’ aging, also in cement. This creates a wine of purity and vibrancy, with no oak covering up any of the fruit’s nuances. It has aromas of red and black fruits including cherry and blackberry, pencil lead, and spice box. Sweetly fruited, it is a balanced wine with excellent depth and length. 89 points Robert Parker

When Telmo Rodriguez left Remelluri to found his own company, he and his partner Pablo Eguzkiza were looking around Spain for new projects. They spent a lot of time reading old books, picking up hints of where and how the famed wines of older times were made. In the course of their research, they came across the “mountain wines” of Málaga, beloved by the English. Less famous than sherry, the wines of Málaga were at a substantial disadvantage, commercially speaking, from their Andalucian neighbors: the wines were made in a rugged, mountainous inland area, rather than right by a major port. As such, the wines eventually simply faded into obscurity, but Telmo and Pablo were determined to recover the glory of Málaga’s mountain wines. Thus was born Molino Real.

The Mountain Blanco is Molino Real’s dry wine, made from 100% Moscadel de Alejandria. Sourced from two steep sites on slate slopes from 500-1000 m in elevation, this wine was fermented with native yeasts in stainless steel tanks and aged for 9 months. Delicious aromas of orange blossoms and citric overtones come through on the nose. The palate has substance yet is bone dry and with good length. 89 points Vinous Media

Málaga is located between the mountains of Granada and the Mediterranean Sea and is unique in its high elevation and close proximity to the ocean. The region has produced prized expressions of Moscatel (Muscat) since the days of ancient viticulture, when Greeks first planted vines here in 600 BC. As is traditional, the grapes for the sweet wines are dried on cañas (reed) mats in the sun. After drying, the grapes go through a selection process, with only the best bunches being kept for winemaking. The result is rich, long-lived, sweet wines that honor the tradition and history of the “mountain wines” of Málaga. This luscious bottling from Molino Real offers alluring flavors of orange, pear and honey. It’s not too alcoholic, and has enough acidity for balance.