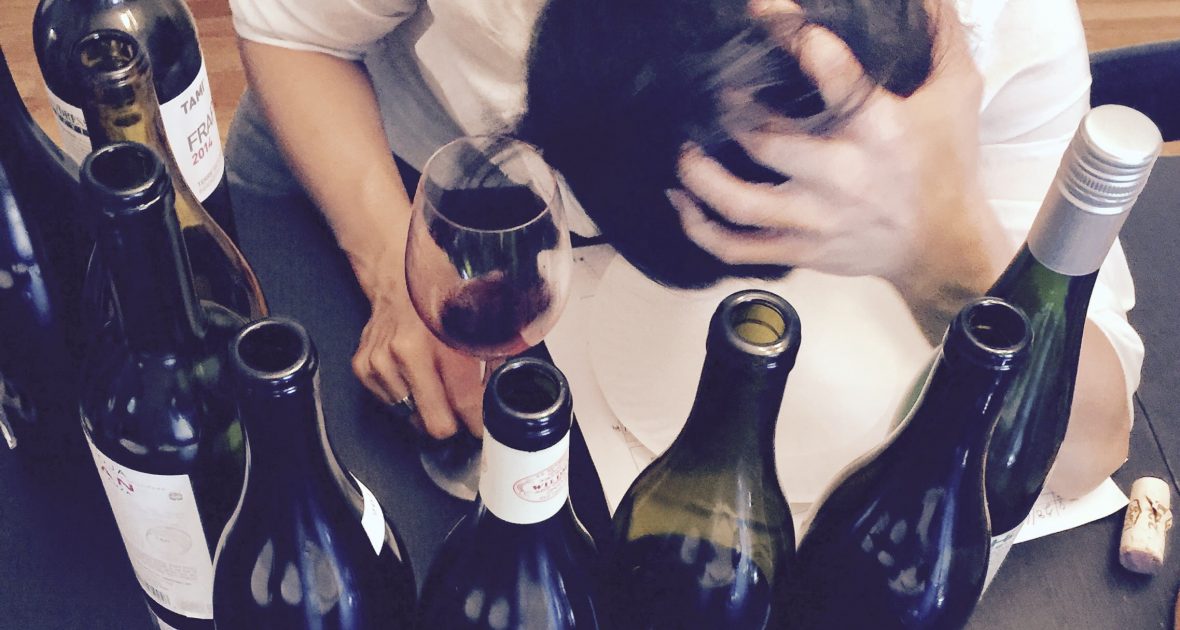 The Lie: Sulfites are bad for you.

Talking about sulfites in wine is like talking about politics: it’s uncomfortable, confusing, and sometimes it gets people a little too riled up, but it’s important. And although you’re your own person and you should make up your own mind about these things, isn’t it better to be as informed as possible before making yourself a martyr to NSA wines for the rest of your life?

I’m beyond (nervously) excited to write this post—sulfites in wine is a topic I’ve wanted to write about for years. I have a family member who is sensitive to sulfites, and it’s been an adventure figuring out which wines are safest to bring for Thanksgiving and Christmas. And if I had a nickel for every time a concerned customer asked me why they got headaches, rashes, and hives from certain wines (and they’re sure it’s because of the sulfites), I’d have enough money for med school.

I know how hard it is for wine lovers to navigate the murky (sometimes literally) waters of organic, biodynamic, “natural,” and NSA (no sulfites added) wines to fit their health restrictions. It takes a lot of time, willingness, and patience to learn about what sulfites are, why they’re used, and why everyone is so scared of them, but it’s worth it to try to understand! No one has all the answers and I’m certainly no doctor; and you are the only one who knows what your body likes and what it doesn’t. If this is your first time delving into the mysterious world of sulfites, may it be only the beginning of your journey towards greater knowledge!

This is an important distinction, so listen up! Sulfites are a naturally occurring byproduct of the process of fermentation. Along with tannins, alcohol, sugar, and acidity, sulfites are an important part of preserving wine. Sulfites also protect wine from harmful bacteria and premature oxidation. Without sulfites, your wine would be downright disgusting, and probably dangerous to drink! But most times, sulfites on their own just aren’t enough, so the vast majority of winemakers worldwide will add sulfur dioxide, usually in the form of powder. This is done (either) right when the freshly-picked grapes enter the winery, and (or) just after the grapes are crushed and are beginning to ferment.

Sulfites are No Fad

Sulfites weren’t something suddenly invented by cut-rate California winemakers in the ‘80s, or by Australian winemakers wanting to make an easy buck with their critter wines. Ever since humans had a rough knowledge of the principles of alcoholic fermentation and how to make wine last longer than a few days (and believe me, this wasn’t the case for a good chunk of winemaking history), they’ve known the benefits of sulfites and used sulfur dioxide to their advantage. The Germans caught on early, and were the first (in 1487) to issue a decree permitting use of sulfur dioxide to help preserve their glorious (white) wines for years to come, thus revolutionizing the German wine trade in the 15th century. And you know what? It’s not just wine that contains sulfites—you’ll find them in ridiculously high amounts in your dried fruit, bottled lemon and lime juice, and sauerkraut, and in moderate amounts in a plethora of other foods and drinks.

The Boogeyman in Your Bottle

So, if sulfites are naturally occurring and sulfur dioxide has been around for centuries, why is it that people are scared to death of them today? Let me introduce an important character in our sulfite discussion: Strom Thurmond, former U.S. Senator of South Carolina. Whatever you may think of this stalwart public servant, he has several lasting legacies that persist well beyond his grave, with his most well-known bequeathal consisting of only two words: “Contains Sulfites.” Mr. Thurmond was, among other things, a staunch teetotaler. In fact, he was the head of the NAIII (National Institute of Alcohol Abuse and Alcoholism) in the 1970s—during the wave of so-called “neo-Prohibitionism.” In an effort to deter people from consuming alcohol, he succeeded in getting a ruling from the Senate stating that sulfite warnings were required to appear on all bottles sold in the U.S. To be clear, this wasn’t to make people aware of the health issues surrounding sulfites (which we’ll get to in a minute)—it was a fear tactic used to make people stop drinking alcohol. That’s the real reason we still have those two unfortunate words on all our wine labels.

Now, let’s get one thing straight: all wines contain sulfites. Remember, they’re naturally occurring—and there’s no magic machine to extract them. Therefore, you won’t find a single label in the United States that doesn’t bear “Contains Sulfites” on the back. (International winemakers are all required to stick this extra warning on shipments headed to the U.S., even though there’s no requirements to do so in their own country!) But here’s the kicker: to 99% of the population, sulfites are completely harmless. The only downside to extremely high amounts of sulfur in wine (which doesn’t happen often) is that it smells pretty rank when you open it—like a freshly struck match, or maybe rotten eggs. Only about 1% of people have a legitimate allergy to sulfites, and these people are more often than not severe asthmatics. Also more often than not, these people well aware of their situation and stay far away from wine. Reactions to sulfites in these situations usually include problems with breathing—shortness of breath and wheezing—not headaches, redness or itching.

What’s Really In a Glass?

So if you’re not a severe asthmatic and you haven’t been given a doctor’s note to swear off wine, what are all those headaches, rashes and hives after just one glass of wine all about? Truth be told, there’s a lot more in a glass of wine than just sulfites! Be aware of the levels of alcohol, sugar, and tannin in your wine. Especially if it’s a hefty wine with high levels of these components, make sure you’re eating food while you’re drinking, and above all, hydrate! Down a glass of water first before you reach for the bottle again! This is one of the most important factors in how wine will affect you, but also one of the easiest to forget. Of course, these are basic rules that we’ve all heard a million times and hate to hear again, but being conscious about these things saves you a heck of a lot of pain and misery later.

Some other things that could diminish your wine drinking experience include the proteins and histamines found naturally in a lot of wines, as well as other additives that some producers put in their cheaper wines to make them taste more appealing. Oak substitutes, Mega Purple grape juice concentrate, tannin powder, and specialized enzymes and compounds can help correct a lot of faults in a poorly made wine and make it taste pretty good, but the ugly truth is this: the more you mess with a wine, the more it can mess with you. And above all else, it’s absolutely worth it to have a conversation with your personal physician about what to avoid and what’s okay.

In plain English, what all of this means is that if you really want to get to the bottom of why you’re reacting to certain wines and would just like to find a few reliable wine choices that won’t make you rue the day, you’ve gotta do a little research. It also means you’ve probably got to start shopping the middle shelves instead of the bottom ones. I’m not saying well-made, cheap wines don’t exist (look for a post on that soon!), but many of those bottom-shelf wines are cheap for some not-so-glamorous reasons.

Wine is meant to give you pleasure. We live in a vinicultural age where almost anything is possible, and that has given us a multitude of delicious experiences to choose from. But because we have all these options, this requires us to be more knowledgeable about what we’re drinking. Sulfites are definitely there in your glass, but for the overwhelming majority of wine lovers, they’re not the culprit of your ills! Think of them as little helper compounds that only want you to enjoy your wine to the very last drop—whether it’s fresh from the bottling line or twenty years down the road.

Finally, one of the most pleasure-giving things about wine is the knowledge we can gain from it and about it. Knowledge is power, and knowledge will lead you to delicious, inspiring, well-informed wine experiences… with fewer regrets the next morning.

Resources for this post, plus more reading for you!

The Wine Bible by Karen MacNeil

A History of Wine in America, Vol. 2 by Thomas Pinney

“The Truth About Sulfites” by Lettie Teague for the Wall Street Journal (March 13, 2015)