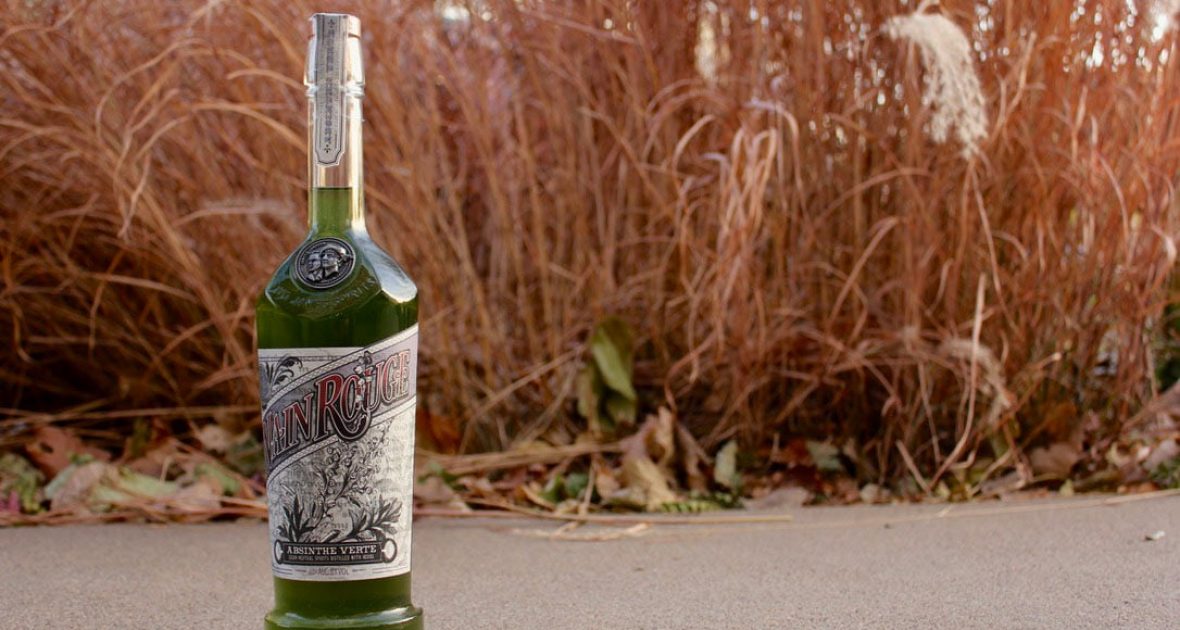 Absinthe is a lesser-known spirit with a well-known aura of mystery. The preferred drink of Oscar Wilde, Ernest Hemingway and Vincent Van Gogh, it has conjured a devout yet specific following historically. This liquor has actually only been legal for 20 years in America and is still confusing to many today. Why? Let’s take a trip.

Although at France 44 we keep absinthe in the cordial section, actual absinthe is a stand-alone liquor with no added sugar, generally high ABV, and contains three defining botanicals. Typically, absinthe runs anywhere from 90 – 148 proof, but many sit approximately between 120-130 proof, one of the highest ABV items you can find on a shelf. The main botanicals are star anise, green fennel, and the enigmatic wormwood. Artemisia absinthium, the scientific name for wormwood, is where absinthe derives its name, but also its centuries of misinformation. Wormwood contains a ketone, thujone, which in higher doses can lead to muscle spasms and convulsions. For years, wormwood and thujone were associated with THC and other cannabinoids. With some help from wine makers and other anti-absinthe bodies of power, the general public came to believe wormwood consumption would induce hallucinations. However, the amount of thujone in absinthe never approaches the toxicity level it takes for any of the adverse effects to take place. The notoriety, accompanied with propaganda and bad science, ultimately leading to a world abstinence from the “Green Fairy”.

Most accounts mark absinthe’s invention sometime around 1790 by either Dr. Pierre Ordinaire, or the Henriod Sisters. Regardless, the wormwood botanical elixir was sold as a medicinal cure, and the drink began to catch on in the 19th century, with the Henriod Sisters starting the Pernod Fils distillery. The second half gave way to an explosion in absinthe drinking. Absinthe, due to its anti-establishment nature of high ABV and misunderstood botanicals, became the symbol of European bohemianism. Bohemianism was a movement of aesthetics, artists, and counter-culturists who poked the eye of the mainstream. Five o’clock was renamed the “Green Hour” in France, because behind wine, absinthe was becoming the drink of choice for many. French wine makers and the law makers began to take notice, and action.

Bad science made people believe absinthe contained toxic levels of thujone inside, causing hallucinations, seizures, and death. Looking back, we see how horribly inaccurate this is. Reports of 19th century absinthe containing lethal levels of thujone have been disproven, and any outrageous or immoral actions could be closer associated with the loose social values of its main drinkers and the high ABV (absinthe drinks easier than 60% ABV). In Edgar Degas portrait L’Absinthe, the melancholy patrons drinking the green drink were vilified by art critics and considered a ghastly portrait of its real drinkers. By the 20th century, laws to ban the drink for its dangerous levels of thujone were introduced. By 1915, America, France, and England had banned the drink. How closely this was followed is questionable, especially with the ease of movement of distilleries to Czechoslovakia and Spain, but for the next 100 years, absinthe struggled to stay around and became a faint infamous drink of another era.

The Return of the Green Fairy

Fast forward to 2007. Absinthe is illegal in America and other parts of Europe, but not impossible to find across the Ocean. The growing cocktail scene in America makes people reopen old cocktail books from before 1900. While anise liquors to replace absinthe were available, people wanted to true thing.  Lucid Absinthe Superiore negotiated with the USDA to keep thujone levels to a low level in the absinthe, and other countries soon followed. In 2007, France and the United States had both lifted their ban, and for the first time in 95 years, absinthe was available for sale in America. In the years prior, St. George spirits in California had been distilling and experimenting with absinthe (distillation was legal, sale was not). When the ban was lifted, St. George released the first American made absinthe in almost a century. 12 years later, more imports have been coming and craft distilleries in America are beginning to experiment more and more.

Although some bad science and lore still follows absinthe in 2020, its comeback is something to note. With a better understanding of chemistry, less judgment on what people drink, the green fairy is here to stay and clear you head.

Absinthe to try after reading;