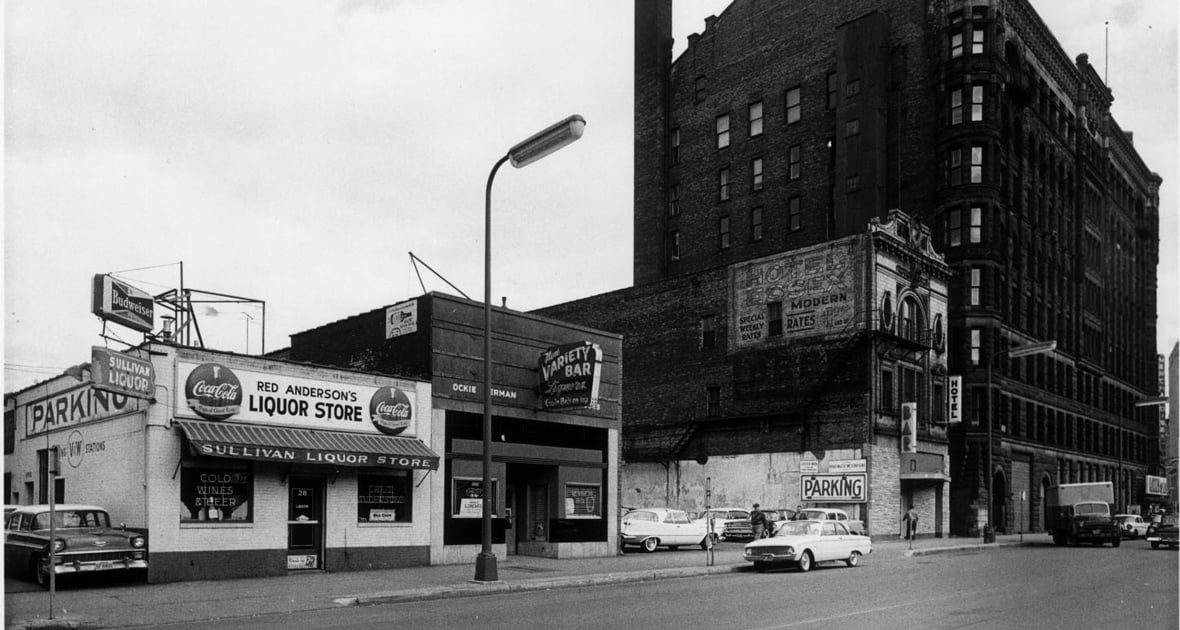 As you walk into France 44, you’re greeted by lofty vaulted ceilings, natural light pouring in through huge windows, 9000 square feet of open space and wide aisles, and a bustling staff who know the store’s nearly ten thousand products like the back of their hand. The next door Cheese Shop is a treasure trove of unique cut-to-order cheeses, gourmet grocery products, small-production artisan chocolate, and locally-sourced cuts of meat. We always say that whenever the zombie apocalypse finally happens and you need to hole up somewhere, there’s really no better place to be locked up than in France 44.

But the origins of our bright, shiny food and beverage haven are, well, not all bright and shiny.

In the late 1950s, a professional fastpitch softball pitcher named Red Anderson got fed up with selling Buicks and decided he’d rather be the master of his own fortunes as the proprietor of a liquor store. Using his local fame as a star pitcher, he got “connected with the right people” to obtain a liquor license—not easy in those days—and opened up Red Anderson’s Liquors. Situated in the infamous Gateway District of downtown Minneapolis near the beloved Gluek’s Restaurant and Bar, Red Anderson’s Liquors was so tiny that an adult could nearly touch both sides of it with outstretched arms. After changing locations a couple times, the store settled in at Grant and Nicollet in 1965.

But times, laws, and city layouts change, and in 1974-75 Red was forced to move yet again because of downtown redevelopment efforts. But Red was ailing with emphysema, so it fell on his son Rich to mortgage his house (not something his wife was thrilled with) and purchase a defunct gas station at France Avenue and 44th Street in Linden Hills, where the store still remains today. A house mortgage, parents who couldn’t work, mounting hospital bills, an angry wife and a young child, and zero guarantee of success: these were the beginnings of France 44 as we know it today.

You put in the work, you take big chances, and sometimes the universe comes alongside you to help things go right. Rich, a famed local golfer, evolved the store (which was renamed France 44) to focus more on wine to appease his golf buddies, who liked the panache of wine and viewed wine as an important status symbol. A sign of things to come? Most definitely. And those things were not too far off: the 1976 Judgment of Paris brought about a whirlwind of excitement for wine around the country, and Rich and France 44 were there to welcome the wine-curious with open arms.

After doubling the size of the building (and the resulting business it brought) in 1983, it was clear that the only way to keep expanding was up—literally. In 2000, Rich razed the building and erected the building we call ‘home’ today. But the Andersons are hardy business folk, and since business must go on even when hammers are pounding and cranes are swinging, Rich brought a temporary trailer onto the property to keep selling bottles while under construction. (This had never been done before, and the Andersons only got permission from the city to do so “because no one had ever said you couldn’t do it,” says Rick.)

2001 brought about France 44’s first foray into food with the opening of the Cheese Shop. If you’ve ever taken a dive into the restaurant industry, first of all: bless you. For those sane enough to stay away from the restaurant industry, you should know that the foods business is a fickle beast, and shape-shifts are a common occurrence (if you’re lucky enough to stay in operation for a decent length of time). The France 44 foods business has morphed more-or-less-successfully from a deli into a restaurant, a wine bar, and back to a deli throughout the years… but has always included cheese. (Says Rick, “It was literally through a sheer force of will that the foods business survived.”)

In 2007, Rich handed the reins of the business to his son Rick, the current owner of France 44. Rick has since expanded the reaches of France 44 into St. Paul, opening up the St. Paul Cheese Shop and Meat Shop. He has cultivated a dedicated community of employees to continue feeding into the vision of the business, and is a staunch supporter of education, opportunity and growth in his staff. And if you’ve never met the proprietor of France 44, he’s probably the one helping carry boxes out to your car, or the unassuming guy stocking the Chardonnay shelves on any given weekend.

In short, the culture of France 44 has gone—and is continuing to go—through major changes through 60 years of existence. Choice of product is insanely diverse today. Small-production breweries, distilleries, wineries, and family farms have become the heart and soul of what we do. Education—both for our staff and our customers—helps diversify and expand our experiences. We care a lot about what’s in our glasses and on our plates, and we care even more about the people that walk through our doors. We’re passionate about selling great bottles and food, but what we’re even more passionate about is connecting those products with people to create memorable experiences.

We love that we come from humble (and perhaps somewhat sketchy) beginnings. Minneapolis has a sort of “polished grit” to it, and we like that we share in that history. But we also love that we’ve evolved. We hope that comes through when you walk into the store today, and we hope that lays the foundations for 60 more years to come.