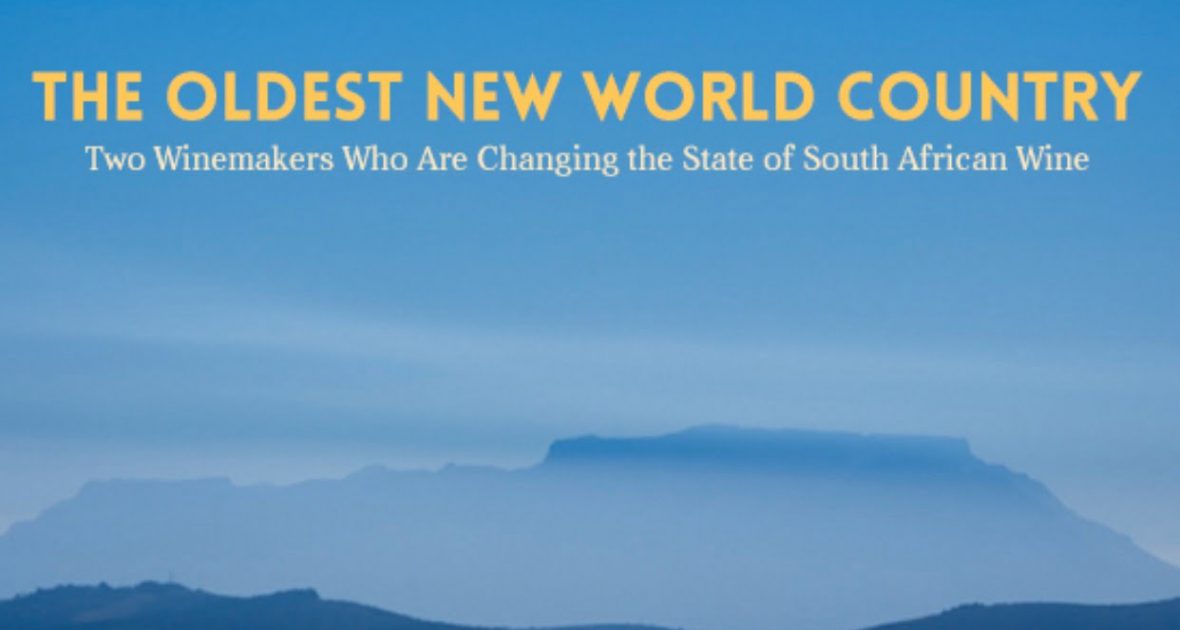 The Oldest New World Country: Two Winemakers Who Are Changing the State of South African Wine

For being a country that has been producing wine for over three and a half centuries, it’s taken South Africa a while to shake off the “novelty” status the wine world has placed on it. But it’s time to start seeing it for what it has now become: a solid cornerstone in New World wine. South Africa has all the fixings of an ideal winegrowing region: a moderate climate with cooling influences from both the ocean and mountains, a multitude of various soil types, a range of elevations, and most importantly, a new generation of zealot winemakers who are fiercely committed to producing wines of quality, longevity, and character.

But while South Africa has always been endowed with prime natural grape-growing conditions, humans, it seems, needed a few centuries of winemaking trial, failure, and experimentation in order to get up to speed. Early on, the dry table wines of South Africa were less than impressive. But the early 18th century brought a new phenomenon to the French and English courts: the ultra-sweet, syrupy, unctuous, and extremely long-lived Vin de Constance. Alas, disease, mold, and foreign pests (looking at you, phylloxera) choked out any international fame South Africa’s wine scene had garnered, and things went downhill fast… for the next half century or so. Ginormous cooperative wineries appeared, hoping to normalize the industry, but it wasn’t until after the end of Apartheid in 1994 that things really got up and running again.

This is the history that Jasper Raats (of Longridge) and Lourens van der Westhuizen (of Arendsig) were born out of. Their world, though, has few ties to the tumult of past winemaking generations. They are part of an era of winemakers who have had the opportunity to travel, learn from other winemakers, and be exposed to horizons that their predecessors never knew about.

Jasper Raats is a wealth of knowledge when it comes to wine. Having held winemaking positions in New Zealand, California, Burgundy, and the Loire Valley, it’s safe to say he has some good experience tucked under his belt. All these ventures have led him to an extremely simplistic, pared-down, honest approach to how he makes his wines today at Longridge: no herbicides or pesticides, no commercial yeasts, enzymes or fining agents, and very minimal SO2 additions and filtration. In other words, he just stands back and lets the grapes do all the work. As we have seen time and time again, if you do the work right in the vineyard, there’s not much to do in the winery. His approach sings of purity, balance, and sustainability for generations to come.

Lourens van der Westhuizen of Arendsig Wines grew up amongst his father’s vines in Robertson, South Africa. Robertson is a place you have to want to go to: it’s over an hour’s drive inland from Cape Town, and not a pastoral wine hamlet you can accidentally stumble upon. Robertson has its big players, of course—Springfield, De Wetshof and Graham Beck, for example—but what makes Arendsig unique has been the shift in culture that Lourens has brought about from the time his father gave him a rocky, decrepit patch of virgin soil to experiment with. His goal was to make single-vineyard wines, showcasing the unique terroir and character that Lourens knew was there. “So often we want to rave about climate,” he says, “but it all starts with the soil.”

This weekend, you’ll get a chance to meet Jasper, along with Colyn Truter, brand manager for the tiny, artisanal Arendsig Winery. Not only are these guys passionate about what’s going on in South Africa; they’re also passionate about telling the world about their incredible wines. They’ll be pouring through a selection of their wines, all of which were hand-selected by our very own wine nerd Dustin Harkins during his trip to South Africa last January.

This is a tasting you won’t want to miss! Make sure to carve out a few minutes of your weekend to experience firsthand the exciting things going on at Longridge and Arendsig.