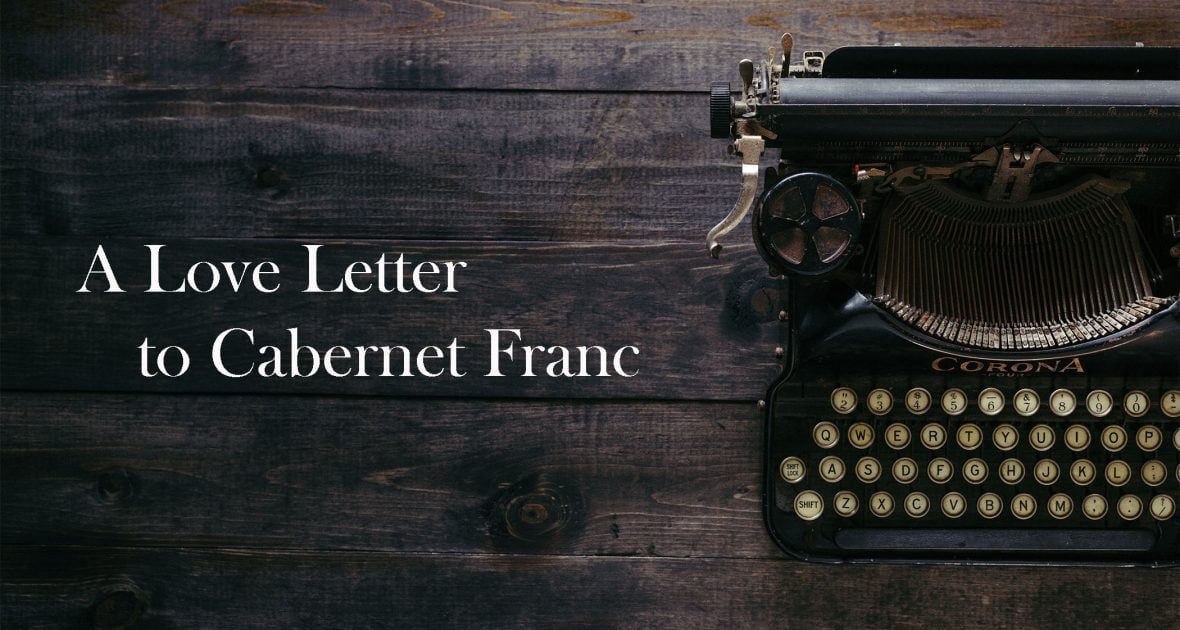 A Love Letter to Cabernet Franc

If you’re currently reading this blog, or any wine blog for that matter, chances are you’ve heard of a little grape called Cabernet Sauvignon. It’s tough to get this far without knowing at least a little bit about it – but what if I were to tell you that its lesser-known family member was a favorite among wine professionals and wine lovers alike and a really great bottle won’t break the bank.

We’re talking about Cabernet Franc, the parent to both Cabernet Sauvignon and Merlot. It’s a bit wild compared to its more civilized children, and that’s what makes it so unique. Whether or not you’ve tried it, I’d like to tell you why this versatile grape is absolutely worth your time and why it’s a staple in my own collection.

Cabernet Franc is a light to medium bodied red that likely originated in the Basque region of southern France. It is commonly used as a blending grape in Bordeaux and some Southern Rhône blends where it adds herbaceous notes of tobacco and spice. Although it’s most common in a blend, it absolutely shines as a soloist because of its insane versatility. It has found a home in nearly every major wine region.

Where you’re buying from can dramatically shift the essence of the wine itself. Some of the best and most renowned Cab Francs come out of the Loire Valley (Touraine, Bourgueil, Anjou, Samur-Champigny, Chinon). These cooler climate wines tend to be leaner and more herb-driven with a sharper acidity. Think bell pepper, bramble, black pepper & tart cherry.

But that’s not to say that you can’t find an amazing bottle from elsewhere in the world.

While cooler climate wines tend to show a greener and leaner wine, the warmer climates will show something a lot richer. From California to Argentina to Australia, the heat and sun produce a fuller and juicier wine. There’s tons of strawberry, raspberry, chocolate, and peppercorn in the glass. No matter where you’re getting this wine from, its peppery nature will always shine through in some form or fashion.

This type of wine is one of my favorites to pull out at a dinner party. A light bodied red with a little funk and fruit is almost always a crowd pleaser. I’ll stick it in the fridge for 20 minutes to get a slight chill and let it do its thing at the table. Because of its versatility it pairs well with a wide variety of dishes. The lighter styles are great match with goat cheese or grilled salmon, while the fuller and richer styles are complex enough to stand strong against grilled steaks and pork chops.  A tomato-based dish would also wow whoever you’re entertaining once this pandemic decides it’s had enough.

Like any wine, it’s easy to do a deep dive and figure out which styles you like best, but for simplicity’s sake here are four different Cab Francs we carry at France 44 that all show off the unique characteristics of this grape in a fun and comparative way.

2. Domaine de Pallus ‘Messanges Rouge’ | Chinon, Loire Valley, France | $18.99 | Fifth generation winemaker Bertrand Sourdais has run Domaine de Pallus in the appellation of Chinon in the Loire Valley since 2005. After 2009 the winery committed to biodynamic cultivation and all manual harvest. The grapes used for this particular batch of wine are aged in stainless steel for a little over 6 months which results in a simple and soft wine with bright red berry notes, a little spice and that signature Loire Valley green bell pepper. At a super affordable price, this wine is sure to be a favorite.

3. Waterkloof ‘Circumstance’ Cabernet Franc | Stellenbosch, South Africa | $23.99 | In the 90s Paul Boutinot set out to find the perfect vineyard site and it wasn’t until 2004 that he settled on the south-facing slopes of Schapenberg Hill in the coastal region of Stellenbosch. By 2008 the decision was made to turn Waterkloof into a lean, mean, biodynamic machine and is one of only a small handful of wineries in the Cape to hold that distinction. Waterkloof was actually awarded Champion Status by the WWF’s Biodiversity & Wine initiative after making the choice to preserve half of their farm for the indigenous wild and plant life of the region. In this day and age it feels good to be supporting viticulture that aims to help protect our planet. This wine has a ton of blackberry and cherry. A little bit of oak, and a little bit of green pepper, this wine is well balanced and tasty as hell.

4. Fabre Montmayou Reserva Cabernet Franc | Luján de Cuyo, Mendoza, Argentina | $18.99 | Hervé Joyaux Fabre moved to Argentina from Bordeaux to explore the region and its potential for great winemaking. While Argentina is mostly well known for growing Malbec, this Cab Franc is a testament to this winemaker’s drive and passion to create something unique and beautiful given the local terroir. 60% of the wine is aged in French Oak for 12 months. It’s fresh and elegant on the nose, with warm graphite and subtle black cherry. It’s well balanced with a long finish and perfect for lamb or even chocolate.